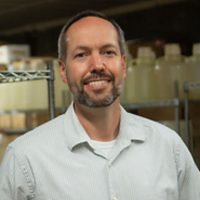 Before joining Hygieia in 2009 as Production Manager, Barry spent ten years in the biopesticide industry, beginning his career in R & D by isolating and screening microbes as potential sources of novel bioactive molecules to target important plant diseases and pests.  He joined the Fermentation and Formulation group where he developed his industrial microbiology skills, and later served as Department Head of this and the Microbiology Departments.  He became Project Manager for a novel fungal biofumigant product and founded a Product Support and Technical Improvement Team.  As Global Project Manager-Fungicides, he led the cross-departmental team tasked with the commercialization and licensing.  He served on the Strategic Planning and Business Development Teams, helped found the Compensation Committee, and was a team leader for the design and implementation of two LIMS projects and a global ERP system.  He was responsible for toll manufacturing and the technology transfer process, and his work contributed to the award of several substantial SBIRS Phase 1 and Phase 2 grants.

Barry graduated with Highest Honors from the University of California, Davis with a BS in Microbiology (go Ags!) and is a member of the Phi Beta Kappa Honor Society. He completed the Project Management Certificate Program at UC Davis Extension, and attained Level I certification in Crestcom International’s Bullet Proof Manager training program. He has contributed to Avian Diseases, Veterinary World, and the proceedings of Western Poultry Disease Conferences, and been featured on NPR’s Marketplace. A former Eagle Scout, Barry relishes his experiences as a youth baseball coach and cub scout leader. He’s served on the Great Day Preschool Board of Directors and Plainfield Elementary School Site Council, and in 2016 established an ongoing partnership between Hygieia and Esparto High School’s Research, Technology, and Biotechnology Program to provide high school students with hands-on industry experience, guest lecture experiences, and internships. Since 2019 he has been a member of the Veterinary Science Steering Committee for Esparto High School’s Career Technical Education Program.

Barry credits his broad expertise to working at small companies with a culture of collaboration across departments, and with countless mentors and colleagues who take time to teach him something new: questions are encouraged, ideas are considered, and opportunities are given to work and think independently. In his role at Hygieia, Barry strives to put into daily practice this philosophy of growth through synergy.