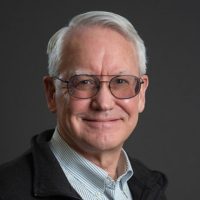 Jim is a biotechnology industry leader with a forty-year track record of disease research, invention, and delivery of novel drug and vaccine products for animals and people in need. His passion for bringing new solutions to challenging diseases has driven him to create a rapidly growing laboratory group which deftly combines scientiﬁc insight with artistic creativity for remarkable results.

Jim initially trained in engineering and business with an emphasis on leadership and management techniques. His scientific  work started in 1980 with one of the ﬁrst clinical demonstrations of lysine as an effective antiviral compound and continued with investigation of antiviral chemotherapies with Richard Shope Jr. at the University of Minnesota. While at Minnesota, Jim extended the scope of his research to include cancers in collaboration with Robert McKinnell, and then later at the University of California at Davis with Dieter Grüenwedel. At Davis, Jim pursued graduate training in analytical chemistry, microbiology, and toxicology in support of work on transition metal biochemistry, particularly organomercurials. He developed several novel analytical techniques during this time. Concurrently, Jim formed Hygieia Biological Laboratories to pursue commercial applications of his work.

Shortly after establishing Hygieia, Jim was joined by Dale Wallis, with whom he collaborated on Hygieia’s second-generation J-5 vaccine development, dramatically improving the effectiveness and safety of this widely used dairy mastitis product. Since that time, Jim has assembled an increasingly sophisticated and growing team that has produced numerous vaccine and pharmaceutical innovations. Notably, these include discovery of a candidate causative agent for papillomatous digital dermatitis – the most economically devastating dairy cattle disease – and the world’s ﬁrst vaccine for that condition, a novel approach to cancer vaccine development, and the world’s ﬁrst commercial vaccine against a venom.

He also takes time to look at special needs that are often ignored by the industry: Hygieia regularly develops vaccines for zoological collections including products for diverse species – several endangered – from primates to reptiles to a pigmy hippopotamus.

In his spare time Jim enjoys sailing and flying sailplanes.